When using iPad Pro, there may be moments when you want even greater precision. So we painstakingly designed Apple Pencil to expand on the versatility of Multi-Touch. And while the technology inside is unlike anything we’ve ever engineered, picking up Apple Pencil for the first time feels instantly familiar. It lets you make any number of effects, right down to a single pixel, giving you more creative freedom than ever before. 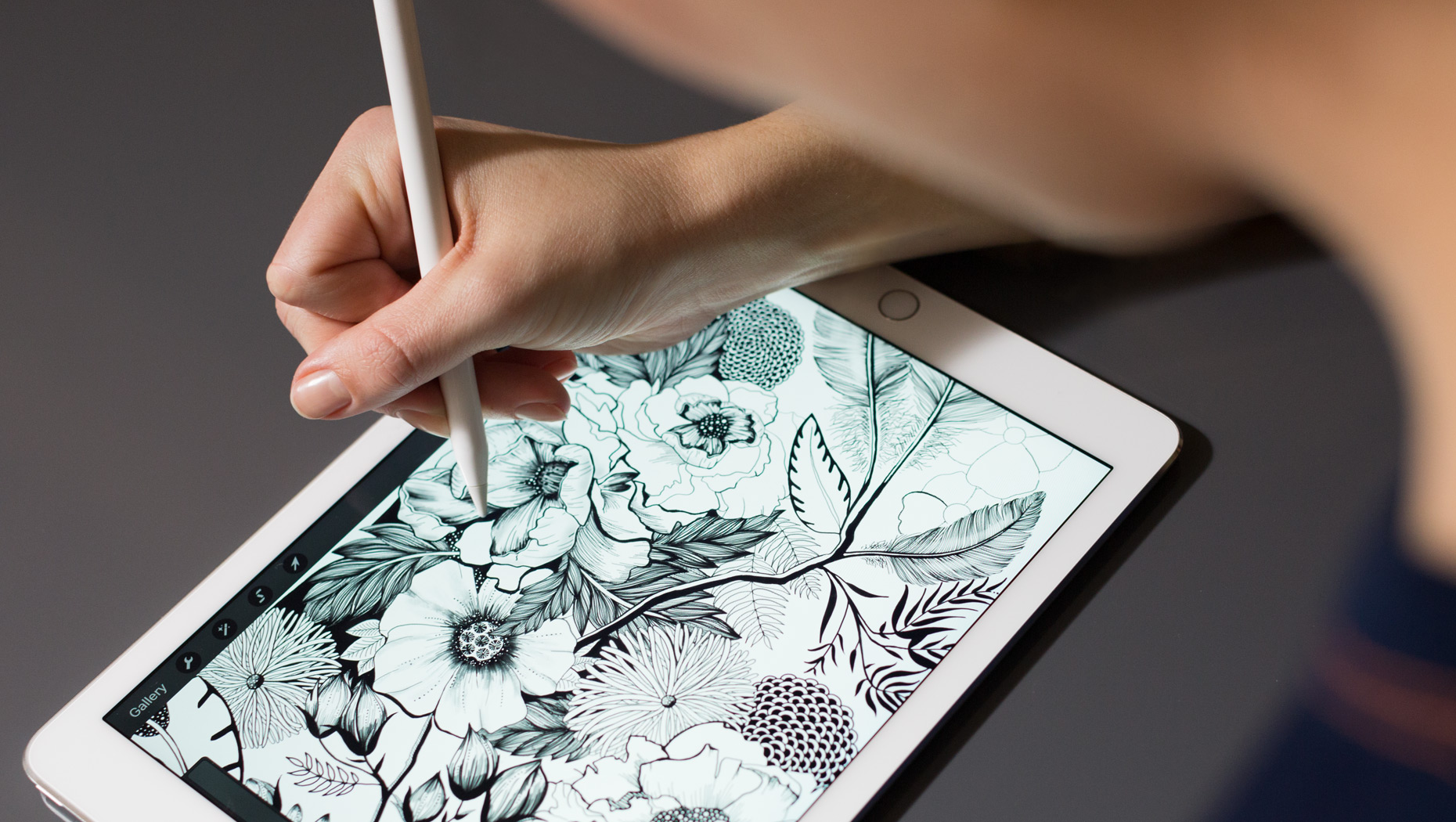 You may never have seen Apple Pencil before, but you already know how to use it. From the first moment, it does what you expect. And then far more. Whether you’re sketching in the park, painting a watercolor portrait, or drafting a blueprint, Apple Pencil gives you a variety of tools in a single instrument. You hold it, but it doesn’t hold you back.

The lightning-fast responsiveness of Apple Pencil separates it from other creative tools. That’s because its latency — the tiny delay between when you begin drawing and the time it appears on the screen — has been reduced to an almost imperceptible level.

iPad Pro knows whether you’re using your finger or Apple Pencil. When iPad Pro senses Apple Pencil, the subsystem scans its signal at an astounding 240 times per second, giving it twice the data points it normally collects with your finger. This data, combined with Apple‑designed software, means that there’s only milliseconds between the image you have in your mind and the one you see on the display.

Within its slender case are intricate and accurate pressure sensors, capable of measuring a range of forces. The carefully positioned sensor determines precisely how hard the tip of Apple Pencil is being pressed down. Press harder to draw thicker lines. Or use a gentle touch for wispy hairlines. The variety of creative effects is virtually limitless. Which means you are as well.

Add shading with a tilt of the hand.

Two tilt sensors in the tip of Apple Pencil calculate the exact orientation and angle of your hand. As you naturally write or draw, the relative positions of these sensors can be detected by the Multi-Touch display. So you can create shading effects simply by tilting Apple Pencil the way you would a charcoal or conventional pencil.

Go ahead, rest your palm on the display.

iPad Pro is designed with palm rejection technology, making it possible to rest your hand on the iPad screen while you use Apple Pencil. So you can focus on drawing with the utmost precision instead of worrying about how to position your arm.

You supply the creative charge.

Slip off the magnetic cap of Apple Pencil to reveal a Lightning connector that lets you charge Apple Pencil simply by plugging it into iPad Pro. The connector features a slightly elongated design, so that charging is possible even when iPad Pro is inside its Silicone Case. A full charge gives you 12 hours’ worth of scribbling, sketching, annotating, and editing.1 And if the battery happens to run out while using Apple Pencil, you can just charge it from your iPad Pro for 15 seconds and get 30 minutes of use.

The ideal tool for artists of every kind.

The precision and versatility of Apple Pencil make it a natural tool for artists — even those who typically work in traditional mediums. Discover how Apple Pencil helps them bring their works of art to life. 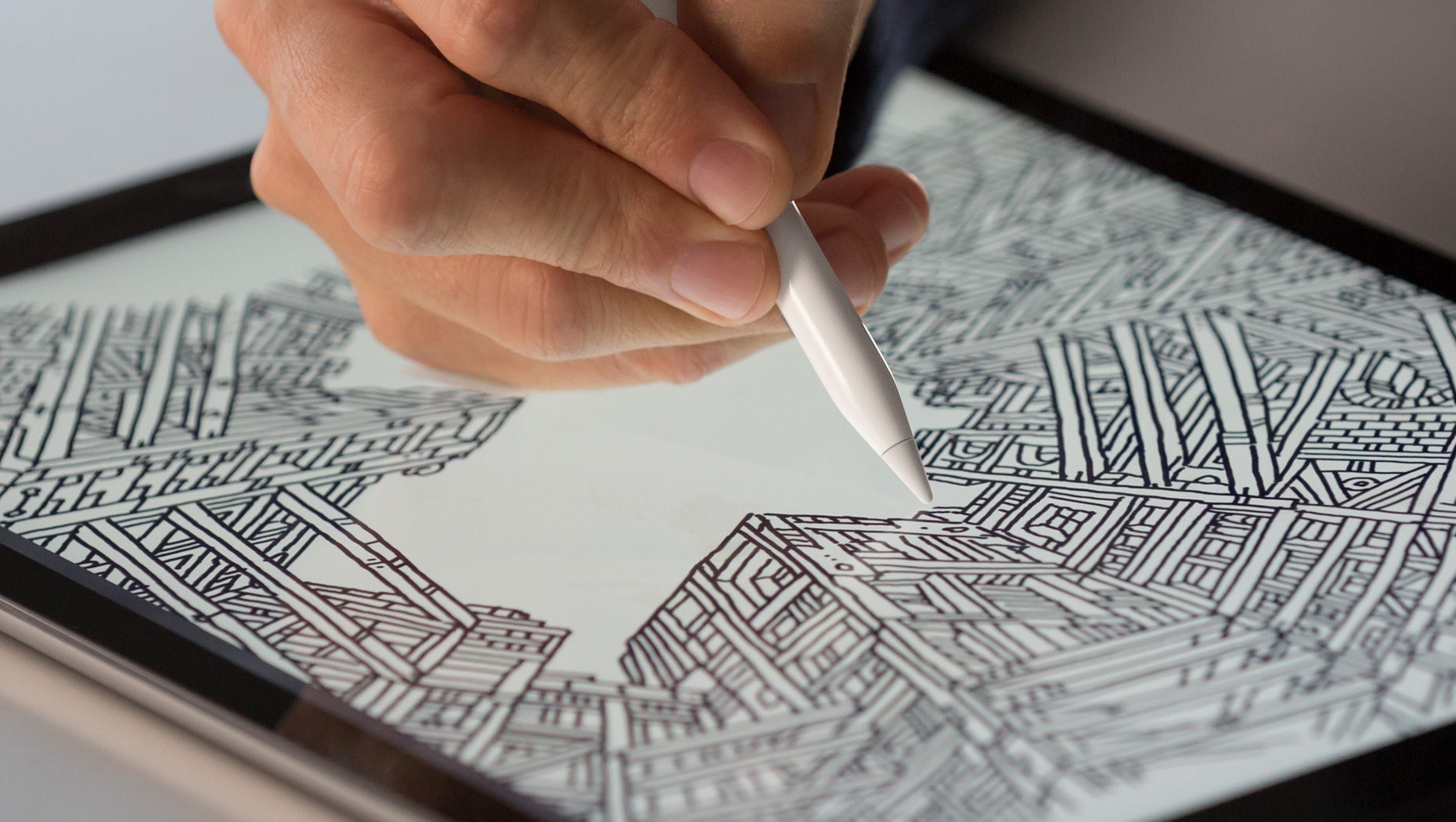 Make the most of iOS when you use Apple Pencil with built-in apps. Apple Pencil also works with iPad apps from the App Store. So you’re sure to find whole new dimensions of creativity and productivity.Jot down ideas while brainstorming. Sketch a diagram during a lecture. With drawing tools that are fully optimized for Apple Pencil, you can use Notes in productive new ways that work for you.